The office has two exploration systems of the company GEONICS Canada, which can perform two-dimensional and three-dimensional imaging of targets that are to be geophysically explored. 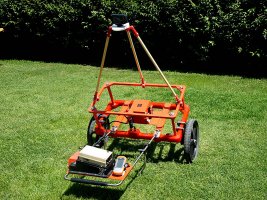 The first system is the detector Geonics EM61 MK2 High Power, which is innovative and widely used (USA Army) for prospection of UXO's. It operates in time domain. Its position is determined using the Global Positioning System RTK GPS. During the survey electric currents are induced in subsurface conductive objects. These currents are induced from fields generated by pulsed currents supplied to the transmitting coil. The dumping of these induced currents is measured in the receiver coil after the pulse current has passed, in four time gates.

The system can detect metallic or non-metallic targets at depths of up to 8m, depending on their size.

The second system is the detector Geonics EM63 which is mainly used for the categorization and orientation of the UXO's (unexploded explosives) or otherwise buried metal objects. 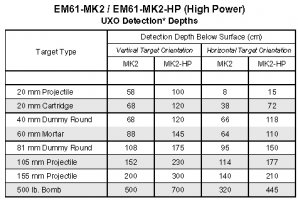 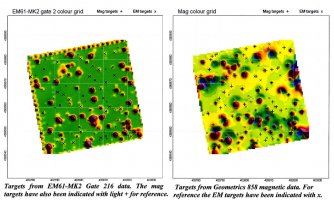 Tweet
back to top
FaLang translation system by Faboba